Terence (Tully ) McCullagh and Gordon Mackay have come up with ten finely crafted progressive rock tracks for their debut release, under the title - The Unicorns Are Screaming.

Both musicians have had long professional careers. Tully as producer of numerous pop hits as well as frontman of his McCully Workshop group. Gordon moved to jazz and rock after his classical studies. Tully is a very talented and creative bass player, though really a multi-instrumentalist. Gordon is an electric keyboard wizard.

The musicianship is top class. There is some very personal and honest songwriting and the musical arrangement is as one would expect from artists at the peak of their careers.  The production is signature McCullagh with attention to every detail, and with the soundscape to match.

Posted by Special Panel link at 08:56 No comments:

Special progressive rock album for Tin Can Discs label towards the end of 2020.

Two seasoned rock musicians, Terence (Tully) McCullagh and Gordon Mackay have got together to record an exciting and musically ambitious album scheduled for release in October 2020.

Posted by Special Panel link at 09:09 No comments:

The new album, titled INFINITY, from one of Cape Town's greatest rock bands of all time, McCully Workshop (also known sometimes as McCully's Workshop), is slated for release on the 25th of October 2019.  It is a time leap into the eighties, that wonderfully creative era of musical inspiration, but is also a record with a quality of sound that could only have been produced now.

If your band played in the clubs of that period, you covered the songs of the Beatles, Supertramp, Queen, Police, The Small Faces, Tears for Fears, Bee Gees, Fleetwood Mac, Pink Floyd and others, and your own writing could not help but be deeply influenced by these artists. McCully Workshop's own hits, Birds Flying High, Buccaneer and Chinese Junkman were pure eighties UK style pop rock.

The tracks on this new album, nineteen of them in all (it would be a double album if we lived in that era still), are written and produced by different members, all members being represented on the composition side, with bassist and master producer, Tully McCully overseeing everything.

Many of the new tracks pay tribute to the above mentioned super groups. Though all new material, there is a nostalgic feel to the collection. It is a celebration of commercial rock, with a contemporary production approach.

McCully Workshop were/are a party band, a show band, whose fans came back for more, week after week, to their Rondebosch residency, amongst others. They were booked to play the Matric Dances (Proms) of many a South African school who wanted to make their celebrations something to remember.

The band members enjoyed their live gigs and had the luxury of holding on to their day jobs, an essential reality check for musicians who were on stage for the good time. Tully and guitarist Richard Black are successful sound engineers and producers servicing the advertising industry. Drummer Mike McCullagh is a show producer with his own business and pianist Rupert Mellor was packing them in at the solo residencies he had at different piano bars in the week. Relatively new addition, Gordon MacKay (brother of 70s UK rocker Duncan MacKay) adds to the fullness of the live sound. He also contributes two of his songs to the package.

Many bands see their career plan as starting out in a small club in their home town and growing a following and a media image. With luck they get a hit or two and then sign a record deal and have a shot at the international market. McCully Workshop did not dream of this path. Perhaps they did not want the disappointment that that route almost certainly guarantees. Perhaps the life in a city like Cape Town was too good to sacrifice. They have the talent to play in the bigger arena but do not have the singleminded hunger necessary for greater success in the pop music game.

Tully McCully produced number one hits for several acts, Lesley Rae Dowling and Crocodile Harris, to mention two. His own vocals on some of the tracks on Infinity, are the perhaps the best he has recorded with his own band.

Logically many of the songs on this new album reflect on the past more than anything released by the group up to now. This is to be expected for a band with a thirty year track record on stage and at least half a dozen albums behind them.

Posted by Special Panel link at 03:14 No comments:

We want to announce that we are putting this idea on ice for the moment .

We are mindful of the fact that it is not every project where one of the protagonists literally drops dead while recording, a fact that makes this the groups final album.

The main reason for this delay is that it is not clear what form a vinyl (LP) will take. In addition to this the digital release is proceeding with many platforms having already uploaded the master, ahead of the March release, and we don't want to put the brakes on that. This includes Tidal, where high quality downloads will be available.

By what form a vinyl release will take, we mean -
a) Will it be a white label only pressing? The cost estimate we put out was for a white label but some fans have suggested they want something more.
b) Will there be any artwork on the label or even will there be a printed sleeve?
The cost difference is pretty substantial if we print paperwork. Tins Cans Discs have committed to making 100 LPs available a cost. Thereafter the balance of the limited pressing (another 50 pieces) would be sold, but it has been pointed out that a white label might not be so interesting for dealers?

Producer Tully McCullagh is also considering a way of making the vinyl release different from the digital album.

We have found a possible collaborator in Cape Town who has agreed to help get this collectors edition distributed.

Fans are asked for some patience on this one. More soon on these pages. Please feel free to comment.

The new single from McCully Workshop is called Mister Moon. It's scheduled for release on the 19th of February 2019 which will be the February Full Moon. The north American indigenous peoples call it a Snow Moon but perhaps for the band a Blues Moon might fit better.

This time it's the turn of keyboard player, Rupert Mellor on vocals. The last single, was sung by guitarist Richard Black. Both songs will be part of an album due out later this year.

The new song is a blues rocker. Rupert tells the story that he came home late one night after a gig and found a page of lyrics on the kitchen table.

He says, "My wife Cheryl was having a case of the Blues and wrote the text as a kind of poem. The next day I put the music to it".

He took it the producer Tully McCully who decided to record the song.

We will post a pre-order listening link for fans as soon as we have one.

Posted by Special Panel link at 10:30 No comments: 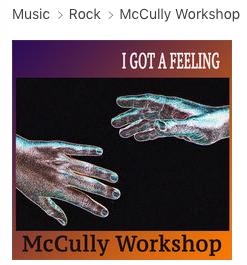